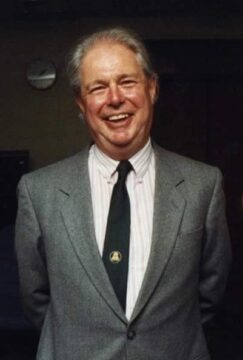 David Hughes, copyright resides with the original holder, no reproduction without permission

David Hughes died recently and his funeral was held on Monday 5 Dec. Here is an obituary for him from Louise and Roger Willcox, which David’s widow, Marian, is happy to be shared.

“David Hughes moved to BBC Pebble Mill in 1974 after having established his credentials at Television Centre in London. He was encouraged to move to this Birmingham Audio Unit by the then head of department, Bryan Forgham, who knew David from his time at Television Centre. The Audio Unit serviced both radio and television programmes – studios, outside broadcasts and post, and promised a greater variety of work.
David’s specialism was sound for multi-camera drama – Pebble Mill was the home of the English Regions Drama department and hosted a lot of drama from London production teams. At Television Centre he had been one of the sound supervisors to mix series 1 and 2 of Doctor Who, so it was obvious that, when the Doctor Who story Horror of Fang Rock was to be recorded at Pebble Mill, David should be chosen as the sound supervisor. The story involved the fourth Doctor, played by Tom Baker. The ‘hurry-up and wait’ nature of making television was even more true for a Doctor Who episode, as everyone had to wait for the special effects team to finish their preparations before a safe recording could begin. Horror of Fang Rock was made at Pebble Mill because engineering work at Television Centre had reduced studio availability and it was the only Doctor Who story of the earlier series’ to be made outside London.
At Pebble Mill, studio multi-camera drama sound supervisors followed their dramas into the dubbing theatre. David was a skilled dubbing mixer and was a great advocate of this continuity, arguing that sound design decisions taken in the studio often made dubbing easier and quicker, and the final sound design more polished.
David was part of the team that mixed the three innovative and iconic Pebble Mill shows: the daily Pebble Mill at One – for those too young to remember, think The One Show, but at 1pm for an hour, with a large audience. Live music in every show and the whole building wired for sound and cameras. The studio was the huge marble-floored reception area, with floor to ceiling windows overlooking Pebble Mill’s front lawns and tree-lined Pebble Mill Road. Items were many and varied: live band; celebrity interviews in the foyer studio – often actors (including Tom Baker) working in the studio next door; gardening items from Pebble Mill’s many landscaped areas; occasional visits from military bands trouping on the front lawns with the odd helicopter fly past, shot from the roof, thrown in; once, a Harrier Jump Jet landing – live and to the timed second – in the field next to the Pebble Mill car park! Pebble Mill at One ran from 1972 to 1986. In the same stable were the occasionally anarchic foyer-based Saturday Night at the Mill chat show (think Graham Norton, but with a smaller budget!) and Pop at the Mill – Pebble Mill’s mini-Glastonbury, from the back garden. Wall to wall music – with all the technical challenges that that involved. David’s talent navigated through them all.
Pebble Mill was also the home of a new Asian Unit, which David was involved with. He was well respected for – and very proud of – his Asian music mixing skills; stylistically so different from western music. In recognition of his work, David and his wife were invited by the Unit’s producers to the Ravi Shankar 50 years in broadcasting celebration – a big event at Pebble Mill.
When David arrived in Birmingham, the Audio Unit made mono programmes for television, but stereo programmes for radio. Television didn’t start broadcasting in stereo until August 1991, but Pebble Mill’s Audio Unit staff were well prepared – not least because, in 1985 David was the first sound supervisor to mix a multi-camera drama in stereo. The series was called Late Starter, about a retired university professor (Peter Barkworth) starting again after his wife walks out, leaving him penniless. Making this series helped the BBC to decide, and define, the ‘format’ (usually centre speech, stereo music and effects) for the broadcast industry, and informed the wider BBC audio community on the operational challenges associated with stereo recording for TV.
In retirement, David went on for twenty years organising and making cassette tapes for the local Talking Newspaper for the Blind. He also did many talks for local organisations called Grampa’s Gramophone
where he took along numerous 78 records of Music Hall songs and others and played these on his grandfather’s wonderful old gramophone which had a large wooden horn. The audience were soon singing along.
When David was admitted into care, five and a half years ago, he still continued his life of music. Each night he conducted silently beside his bed. If anyone asked him where the music was he just replied “It’s all in my head”. He told his wife that he would only ever pass away if and when this music disappeared.
Not long before he died, he said the music was fading….
David passed away on 14th November 2022, he was 90.”
Louise and Roger Willcox

Here are some photos from cameraman Bhasker Solanki of the lighting crew on Pebble Mill at One, setting up for a fashion item on the banks of the River Rea. 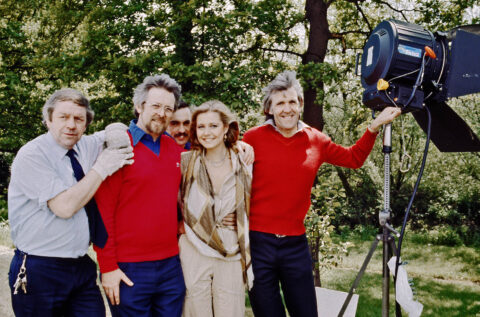 Andy Frizzell at the back, Peter Booth in front, Keith Bullock holding the lamp stand. Photos by Bhasker Solanki, no reproduction without permission 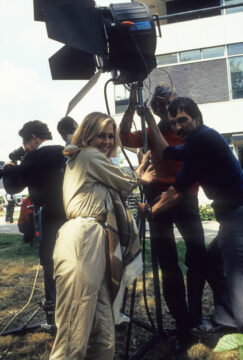 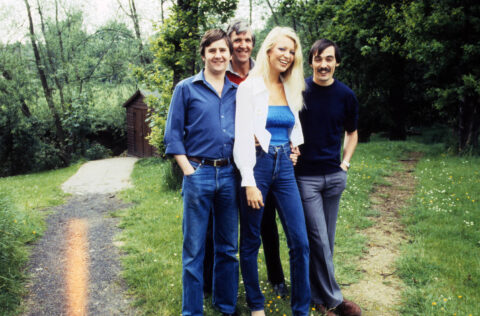 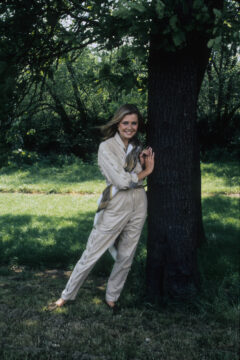 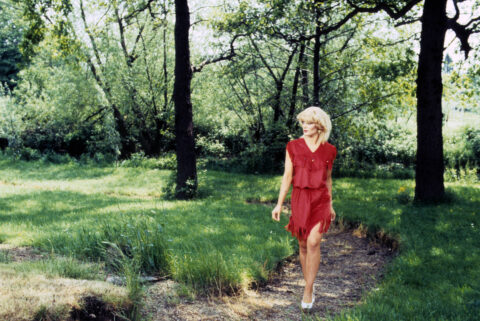 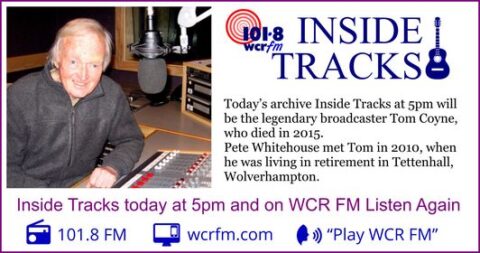 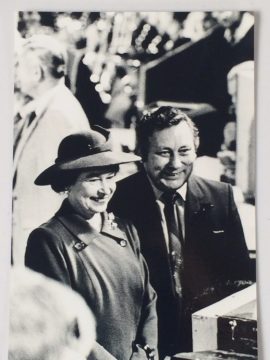 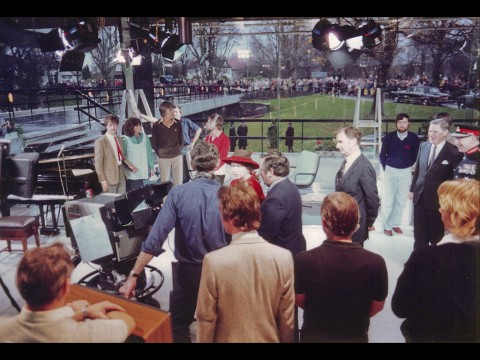 The Queen visiting the Pebble Mill at One foyer studio in 1981. Photo from Keith Brook. 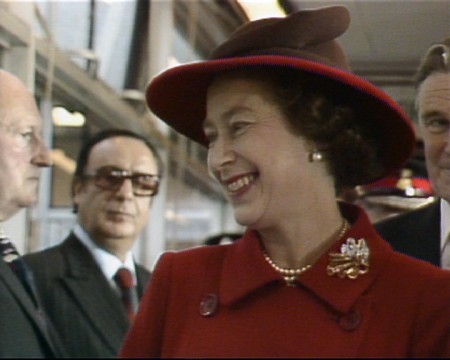 The Queen visiting Pebble Mill in 1981

Stephen Hawkins: My Mother, Joyce Hawkins, who was Head of the Costume Department, has asked me to state that “In advance of the Queens visit HM named one person she would like to meet. That person was George Collins, a dresser in the costume dept. Much to the genuine surprise of everyone. They had a private conversation.

David Short: I had just joined Pebble Mill as a camera assistant and worked on the Royal visit.

Norman McLeod: Fortunate to be presented in Radio Studio 1. Charmed as everyone was. Palpable memories still treasured together with the pictures, which I am still searching for! Requiescat in Pace.

Harold Rich: As she passed me and my musicians she turned and said “Are you the backing?”

Here is a gem of a story about Mikhail Gorbachev by former BBC journalist, Richard Uridge:
“Many years after the Soviet leader stepped down he was asked to open a mobile phone shop in Cheltenham. To the surprise and delight of the owner he agreed and the event was duly covered by the BBC at Pebble Mill. As a Midlands Today newsreader I introduced the story and back referenced it with words to the effect “funny old world isn’t it? One minute you’re the second most powerful man on the planet. The next you’re opening a phone shop in Gloucestershire.”
I thought it was hilarious. But I got told off by my bosses for editorialising. The shop owner wasn’t too chuffed either. Said I’d demeaned his business. I wasn’t at all sorry. Reckon he got a lot of free publicity.
My other Gorbachev-related comments – on radio rather than telly – are too excruciating to relate here and warranted a grovelling letter of apology.”
Richard Uridge 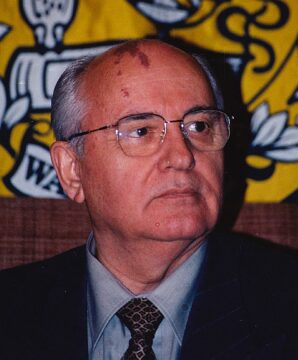