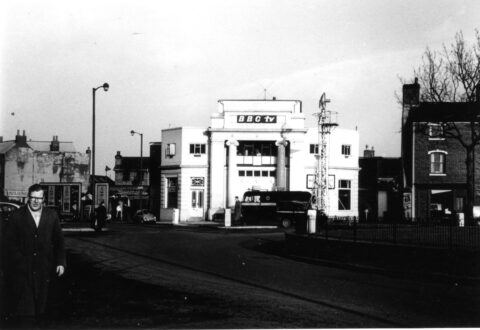 I am anxious for this not to be a paean of self-praise, but a celebration of achievement by all Staff who worked at Gosta Green Studio Birmingham, prior to the opening of Pebble Mill, so…

This is my much-abbreviated personal History of Gosta Green Studio, Midland Region, 1958-71.

The studio, a former cinema, opened in 1955, being situated two bus-rides away from the administrative centre at Carpenter Road.

I joined in December 1958 as Wardrobe Supervisor and sole member of the Costume Department. I had a small room with sink, an industrial sewing machine, a telephone and a cupboard containing a box of assorted aprons, a coat circa 1930 and just one Elizabethan sleeve.

The Make-up area had only one member in residence, Neva Bunford, but the two set Designers, Margaret Peacock and Charles Carroll were based at Carpenter Road.

Network Dramas were already in production under the guidance of Peter Dews and during my 13 years there we transmitted 64 single plays and remain justly proud of the reputation given us by renowned critic Kenneth Tynan, who said: “The Mecca of Television Drama is in the Midlands”, (our London colleagues never quite forgave us).

In addition to single plays, both period and contemporary, we made four serials, eight series of differing lengths and five twice-weekly ‘soaps’ all black and white and live.

Rehearsal rooms, Directors, Actors and Costumiers all being centred in London, I spent many hours on trains reading and working on scripts, which on arrival at Paddington would be deposited in a left-luggage locker to save my carrying them around. The I.R.A. then put a stop to this as their activities caused the lockers to be closed for security reasons. On three separate occasions in the early seventies I happened to be very close to their explosions while working with Ian Carmichael on the Peter Wimsey series. One was at St James’ Palace close to Lockes Hatters, where we had been fitting just before.

I attended rehearsals, met actors for fittings at Costumiers, took actors shopping and carried all my purchases back to Brum. (London Designers enjoyed a follow-up system to collect and carry their goods to TVC…). This became a weekly routine during the “Soaps”. On the return journey I read the following week’s scripts.

Our network output was not solely confined either to drama or to the studio, and recalling it all now I am amazed at the variety of programmes we transmitted. Being responsible for both regional and London productions whenever they came into the Midland area, I travelled widely, to Cosford and Bridgnorth RAF stations for the Charlie Chester Shows, somewhere into the countryside for Children’s Caravan, to Nottingham Ice Rink for Cool Spot and Hot Ice and Nottingham Theatre for Treasure Island, Leeds Playhouse for Barney Colehan’s Palace of Varieties and spent a week each year in Great Yarmouth for End of Pier Shows. Another annual event, nearer base in Birmingham, was Barrie Edgar’s Chipperfields Circus. I provided costume for Beaulieu Motor Museum, including an early policewoman’s uniform which I was obliged to wear myself when the artiste failed to arrive, and a docudrama on the history of Westminster Abbey.

Back at Gosta Green studio a series of six Beverley Sisters shows recorded in one week needed alterations to each of the twenty-one dresses they provided to wear per day. I worked until midnight with no assistance. When at last I was able to employ occasional freelance help, I was grateful for talented girls from the Handsworth School of Dress Design. After this early start several of them continued their careers in Costume and became TV Designers. Male dressers were sent on request from London for several years until I was granted an in-house secretary and three permanent wardrobe staff in 1964. Before this all paperwork, orders, invoices etc went from Carpenter Road.

We regional Designers occasionally stood in for one another, so I went to Cardiff when Mary Husband was unavailable, and Joan Wakefield came from Bristol to cover for my two maternity leaves.

On Christmas Eve 1961 I gave birth to my son, Stephen and became a rare member of Staff. The BBC did not have many working mothers in those days! In 1965 Stephen’s sister, Caroline arrived. This latter occasion was during the run of The Flying Swan, with film star Margaret Lockwood, a charming and very professional lady who took delight in speculating on the sex of my expected baby. She was good fun and a pleasure to work with. Another set designer, Michael Edwards, came at this time, but no costume designer joined me until Pebble Mill.

We were kept busy with the many musical programmes, classical and pop. We had the Midland Light Orchestra whose grey jackets were my responsibility, as were the choristers’ surplices for Xmas Carols from Kings College Cambridge, dipped to the requisite mixture of Elephant Grey and beige after laundering, pure white being unacceptable in those days.

There were regional opt-outs, magazine programmes with items of local interest and news, and all this was scheduled to fit in between the dramas. I believe Pot Black and Top Gear originated with us, Percy Thrower’s Gardeners’ World came from a tiny little area outside. Eileen Fowler had her team of housewives appearing in a programme called Keep Fit.

My first drama production in Birmingham was Pinero’s The Magistrate on December 20th 1958 followed by So Many Children on December 27th.I had costumed these during my probationary period in London.  In January we transmitted the six-part series The Nightwatchman. Next Peter Dews directed the six-part serial Hilda Lessways, starring Judi Dench and Eileen Atkins. My costume designs being made at costumiers in London, we relied on them and British Rail to deliver on time and in finished condition, but …as Judi entered the studio her elaborate cascading bustle fell to the floor in a heap of satin and lace….as the direction “standby studio” rang out, I was on my knees frantically pinning it back up. Judi remained calm and I spent the scene huddled behind a sofa on set.

November 1959 saw us filming on War Office territory in Thetford for The Case of Private Hamp, the story of an execution for cowardice in WWI. This necessitated the use of army cadets from a public school as extras. The bleak and cold conditions were exacerbated by firemen using their hoses so the boys showed initiative by making a fire from wreckage timber to dry their sodden uniforms. Called for action, they rushed out in a cloud of steam. The khaki dye made pretty patterns through their string vests!

In 1961 came Spycatcher, a series based on the wartime experiences of Lieutenant Colonel Pinto and then fourteen single plays, including Waiting for Godot and She Stoops to Conquer, in which Derek Jacobi made his first TV appearance, playing Marlow, a character with a stammer. He told me later that his aunt thought this due to his nervousness but that she understood better before he played Claudius! Part of a costume designer’s job I discovered, is to calm and reassure artists making their first appearance before the cameras. Amongst these I remember Vladimir Ashkenazy before he gave a superb virtuoso performance in one of our classical concerts. Nervousness also overcame the actors in The Newcomers, one of our twice-weeklies, when we went into tele-recording. They thought all their little hesitations and fluffs would be shown over and over again and not edited out!

I enjoyed designing period costumes, and there were many opportunities, including the interesting serial Alexander Graham Bell starring Alex MacCowan and Francesca Annis, but we were soon to be plunged into the era of ‘kitchen sink’. At Gosta we were pioneers of innovative stories, being the first in 1967 to examine the lives and problems facing our immigrant population with a play, The Dark Man,  starring Earl Cameron and a series Rainbow City featuring Gemma Jones and Errol John in a mixed-race marriage. These were location film and studio, followed by the twice-weekly footballers’ United, Newcomers, Swizzlewick, The Doctors and Owen MD. These last two caused very long hours for Costume folk. Finishing in studio at 10pm, we packed costumes, travelled the thirty miles to Chipping Campden in the Cotswolds, unpacked and were ready to start filming at 5am, every week! I escaped this routine twice, leaving the series in the capable hands of my assistant, Ann Brown, and went with Bernard Hepton to Cambridge for The Life of A. E. Houseman, and with Freddie Jones for David Jones’ Omnibus series, John Clare – I Am. This latter filming had the unit involved in an actual murder in Epping Forest!

We can also claim to have been an irritant for Mary Whitehouse’s campaign … although undeservedly, with an innocent and very funny scene in Swizzlewick, one of our soaps.

The studio was sometimes used as a try-out, and after the success of a pilot episode, we were disappointed that the subsequent production would go to London. We found however, that once artistes discovered the journey to Birmingham ended in the friendly intimate atmosphere of our small studio and staff, they were pleased to return. Michael Caine came twice, and Thora Hird more than once, the first time reducing those of us in the gallery to tears by the pathos of her character. I can also claim to have recognised star quality in a performance of Michael’s with Sheila Burrell in Jonny Speight’s drama, Playmates. On no other occasion watching from the gallery have I felt I was intruding into the privacy of others. A brilliant script and extraordinary performances from them both!

This is only a brief account of the output from Gosta Green Studio, which should not be allowed to pass without due recognition. I have correlated it all from my person notebooks, diaries and BBC copyright photographs and believe it to be an accurate and honest account.

I could not have enjoyed being a working mother without the support of my husband, Robert, and the understanding and encouragement of senior staff at Carpenter Road.

My colleagues at Gosta Green were without exception friendly and cooperative. Together we were a great team, taking pride in our work, sharing and helping to alleviate problems and rejoicing together at our successes; a splendid example of collaboration between all skills. Sadly, we left this small studio for the larger ones at Pebble Mill …

The greatly anticipated day duly arrived when the first sod was to be cut for our new home at Pebble Mill.

I had already discovered that my wardrobe would be in ‘Phase 2’ of the development, and “temporarily” was in the basement with no access to natural daylight. I later found out that the small ‘drip-dry’ area had an electric point at floor level! My office, to share with Make-Up, was several floors distant and had no telephone….

Back to the grand opening. It rained. All staff assembled, for Gosta, Carpenter Road and Broad Street news studio (which was situated above a car showroom in central Birmingham). Charles Curran, Director General, was due to arrive at this wet marquee where an oblong space had been cut in the carpet (!), to allow him access to the turf to be cut with an purpose-made long-handled silver spade.  Minutes before his expected arrival someone decided that the exposed strip of muddy grass did not look green, so Design Department was called upon to rectify this with a spray-can of green paint.

Just in time…before the DG arrived to tell us how proud he was to be “Opening these new premises for the BBC. The only building in Europe to be built containing both Radio and Television Studios here in MANCHESTER …..”