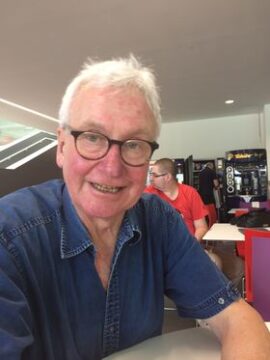 (Roger Shannon wrote this profile piece about Chris Phipps several years ago, but the article sums up the man very well)

Birmingham’s rich music heritage is at long last receiving serious attention, its profile further boosted by the screening of a legendary rock film – and an appearance by one of the city’s cultural torch-bearers.

International music industry consultant Chris Phipps is returning to his home city on Saturday to introduce and discuss a special showing of the Led Zeppelin movie The Song Remains The Same at the Flatpack Film Festival.

It follows hot on the heels of Phipps’ visit to the city’s Home of Metal event last month when he discussed the indigenous origins of heavy metal while also introducing a screening of the 1992 documentary, Motor City Music Years.

Phipps has ramped up a 35-year career in the music industry. Based in the United Kingdom, he has worked in the United States, Japan, Africa, Israel, Holland and throughout Europe.

His passion and enthusiasm for music remains as ebullient as it was in the mid-1970’s when, as a college disc jockey, he began promoting local bands.

He has worked with the best, from Bob Marley to Sting, the Pet Shop Boys and Dire Straits and as a television producer and interviewer, he has put many more bands and musicians on the world’s screens, including Joan Armatrading, Ozzy Osbourne, UB40, Black Sabbath, Judas Priest, Steel Pulse and the Fine Young Cannibals.

Born in Northfield, he attended King Edwards School, Camp Hill, and studied teacher training at West Midlands College of Education. Phipps was already steeped in vinyl and music, booking local bands such as Carl Wayne and the Vikings (later The Move), The Idle Race with Jeff Lynne, who was later to form the Electric Light Orchestra and Jon Lord (later to form Deep Purple).

Phipps recalls: “Sixth form was great – Steve Winwood was playing in local jazz bands before the dawn of the Spencer Davis Group, Robert Plant was getting up to sing with Alexis Korner at the Midland Arts Centre, Gene Vincent was at St Francis Hall, Bournville, the Four Tops played the Odeon.

“At college, I booked Robert Plant’s Band of Joy, got sacked from the Ents Committee for booking Cream for £360 and then reinstated myself by getting The Scaffold to perform in the Common Room; I booked Paul Simon for £6 for the Christian Club, Black Sabbath, the original Fleetwood Mac, Joe Cocker, Jethro Tull …”

The recent Home of Metal weekend summed up many good things about Birmingham’s popular musical heritage. An event organised by music industry entrepreneurs Capsule took the form of a unique walking tour visiting talismanic venues from the 1960s and ’70s, where heavy metal music was born, bred and bottle-fed. Leading the tour was Phipps, back in his home city, and oozing with enthusiasm.

The Metal Heritage Tour took in Hill Street, where the Golden Eagle pub stood and hosted a blues venue; the Whisky a Go Go, now gone, where Cream once performed; the Crown on Station Street, where Henry’s Blues House was resident; Hurst Street and the legendary El Sombrero, where the young Ozzy Osbourne dreamed up the name Black Sabbath; and close by, the Diskery, a place of vinyl heaven. Phipps wrote the tour guide and advised on its contents and cartography.

Phipps says: “I hope the Walk draws attention to the fact that heavy metal is as valid to the Midlands as Matthew Boulton and the Jewellery Quarter. It’s living cultural history, as valid as the Mystery Plays and Shakespeare.

“It’s industrial folk music and draws on the locality, as UB40 drew on their multi-cultural roots in the next decade. The founding dynasty of metal – Ozzy, Sabbs, Priest – are still touring and unerringly loyal to their fans.”

Phipps holds a unique place in the city’s popular music heritage. When I moved to the city in the late-1970s, people would point out this whippet of a young man, all hair and quips.

At Pebble Mill, he produced reggae and rock shows for BBC Radio Birmingham, now Radio WM, and for a time was their roving interviewer, chewing the fat with major singers and bands visiting the region – Joe Cocker, Rush, Whitesnake, Uriah Heap, Sting (for the BBC drama Artemis 81), Iggy Pop, Captain Beefheart (who threw Chris off his tour bus), the Sex Pistols and a trio of reggae giants in Gregory Isaacs, John Holt and Bob Marley and The Wailers.

He also scooped the occasional exclusive, as when he interviewed Dexys Midnight Runners frontman Kevin Rowlands for television at a time when the frequently verbose singer had refused to speak to the press.

From presenting and interviewing on radio, it was a small step to doing the same on television and the opportunity arose when BBC producer Roger Casstles assembled a team to front the BBC Midlands pop show Look! Hear!, produced at BBC Pebble Mill.

The pairing of Phipps with Toyah Willcox is self-effacingly described by Chris: “We were played off against each other as a punk versus a Keith Chegwin.” Toyah, the Birmingham-born actress and singer, was hot-foot from her infamous appearance in the Derek Jarman movie, Jubilee (1978).

Phipps was recruited to join Channel Four’s flagship pop programme The Tube as assistant producer, working alongside anarchic presenters Paula Yates and Jools Holland. He says: “The Tube gave you carte blanche to fight your corner and work with every idiom of music. I found myself all over the world – with Culture Club in Japan; Dire Straits in Israel; Malcolm McLaren in Los Angeles; Sly and Robbie in Jamaica.”

His proudest moments were closer to home, involving two Birmingham bands. Chris booked the Fine Young Cannibals and Hollywood Beyond for their first television appearances, shooting on two freezing days in Birmingham at Zella Studios and at the Grand Hotel.

His later career included many hours of television for ITV, via Tyne Tees, and for independent film and television companies, taking in African music, Bob Marley and Chris Rea amongst others.

The programme Motor City Music Years, made in 1992 for Channel 4 and Central TV, was a three-part series documenting popular music in Birmingham from the 1960s to the 1990s.

I worked with Phipps on the series and it benefited enormously from his contacts, enabling us to film previously inaccessible interviewees such as Joan Armatrading, Ozzy Osbourne, UB40 and Duran Duran.

One project involved the boss of Island Records, Chris Blackwell, plus the legendary Bill Graham, owner of the Fillmore in San Francisco. Phipps recalls: “When Bill died, Chris authorised me to search the Fillmore archives. Every band he promoted, he filmed – The Doors, Jefferson Airplane, Grateful Dead, Janis Joplin, Pink Floyd, Jimi Hendrix Experience. Yet because of rights, almost of all of this classic material remains unseen.”

Phipps is looking forward to introducing The Song Remains The Same, at South Birmingham College, Digbeth.

“I saw Robert Plant play to 14 people in 1967 in the Black Horse, Northfield. The band remain an enigma even now.

“I look at the chemistry when two session musicians hired two loose cannons and the power they unleashed. You may leave with more questions than answers, but that’s Zeppelin.”

* Roger Shannon is professor of film at Liverpool’s Edge Hill University and film producer at Swish For more, go to www.flatpackfestival.org, www.homeofmetal.com or http://birminghammusic archive.co.uk