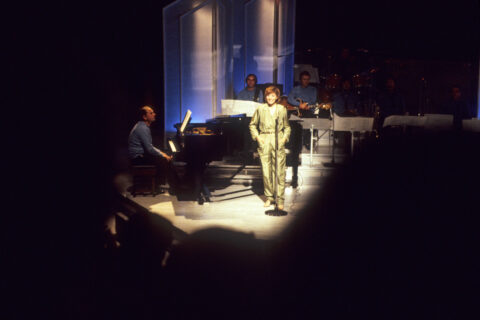 Harold Rich at the piano and John McCulloch on bass.

Harold Rich was a great broadcaster, and a nice guy. I remember him in Studio 6 at Carpenter Road. He knew the Type A studio equipment so well that he was passing useful information in private back to the control cubicle, by putting on cans and speaking quietly into the piano mic. He knew that the SM (Dave Welsby) could reply on Transmission Talkback and nobody else would hear the conversation. That way he was talking about the vocalist, and suggesting how to improve her performance. This is an excerpt from a book called Working in Television written in 1980 by Jan Leeming, who worked at Pebble Mill for a time. The aim was to encourage young people to think about careers in television.

Mike Bloore: ‘The amusing incident bit of this is not quite accurate. Having loaded the wrong tape I went home as I had been in all day and left Tony Rayner to do the TX. It was Tony who had to find the filler item.
I only found out after the weekend and was absolutely mortified!!’

Colin Pierpoint: ‘I believe I was the assistant course manager for Mike’s A course part 1, at Wood Norton in 1970′ Brian Johnson in the Comms Centre at Pebble Mill, on an evening shift – not comedian Dave Allen on the television.

This photo was originally posted on the Pebble Mill Engineers’ Facebook page.

The following comments were posted on the Pebble Mill Facebook page, where I had asked what duties there would be in Comms Centre in the evening:

Malcolm Hickman: ‘At one time we knew what every button and switch did.’

Colin Pierpoint: ‘We did a number of duties on evening shift. for each Midland opt out of BBC1 we extended opt out control to the Pres Desk. There was usually one at every programme junction. Contribution circuits for television were routed through BM Comms Centre from Manchester, carrying Scotland and Northern Ireland contributions, and from Norwich. There were two vision contribution channels from Manchester and two to London Switching Centre, although we could hire extra circuits from BT if necessary. Each of these extra circuits had to be tested. Sound circuits were 669, 297 and 148 from Manchester, and 136 or 276 going north. 289 from Norwich. Sound circuits to London were 549, 296, 271, 698 and 339+689 via Daventry. From London 114 and 270. All these are music circuits, which mean broadcast quality for either speech or music. All were regularily tested. Routing tests tended to be in the evening when they were less used. They were switched according to the SB chart which was issued daily by Circuit Allocation Unit in BH London. Later changes and additions came on a teleprinter in Comms Centre. Control lines associated with these bookings could carry talkback and cue programme. Control Lines into BM from London were 007 and LO-BM 30 and 31, similar to Manchester. So if there was any contribution from the regions in the evening going to London it would be routed through BM Comms. There were sometimes region to region contributions, not ending in London, and contributions from London to the regions, particularily for Scotland and Wales. At the time I worked there distribution passed through here and we were responsible for testing and maintaining circuit quality and rectifying faults. Birmingham fed Towyn transmittion station with Radio networks (R1 and R2 I think), as well as all the Midland transmitters and feeds north. We also routed circuits within the building from Studios A and B to VTR. Outside Broadcasts coming into Birmingham on radiolinks had to be tested and routed. These could be in the evening. Radio News contributions looked after themselves most of the time on the NCA network, but we dealt with any faults. However, other sound circuits could be booked for Radio, for example if there was a stereo OB from the Town Hall (later Symphony Hall) of an orchestral concert on radio 3, the lines would be tested to BM comms and then routed to London. We also took calls from listeners and viewers on technical and programme queries.’

Malcolm Hickman: ‘As he is wearing a tie, I suspect he was the shift supervisor. The shift was the B shift – 15:30 until BBC 1 closedown. He would have an engineer on the same shift with him and a second engineer doing the D shift that finished at 22:00 hours. When David Stevens was on form, the Presentation show could extend the closedown by 30 mins.’

Colin Pierpoint: ‘..and once went out in Northern Ireland because their opt out had already closed down and the transmitter automatic switch (TLS failure) switched over to the Midlands RBS (Rebroadcast standby)’

Steve Dellow: ‘When I was on B shift (particularly on a Sunday) I’d be ringing the Club to see whether a certain supervisor was in a state to get back to the Comms Centre so I could go home! Other times on a quiet evening I’d practice coding something with SIS (?) on the bays as if it needed feeding to LO (say). Or practice commoning up some audio circuits to the single speaker in the desk, which was useful to hear all the footy commentators starting to plug up their COOBE’s on a Saturday.’

Jane Partridge: ‘The breakfast shift was more fun… I was working in Contracts & Finance at the time, so Phil and I travelled in together and the aim was to have just had a full cooked breakfast (so there was the lingering smell of bacon) just before the A shift got in. The Comms Centre had its own kitchen, so that early and late shifts could have a hot meal.’