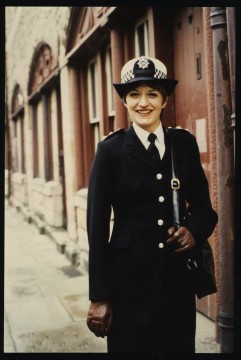 Thanks to Peter Poole for sharing the following Pebble Mill signature tunes.

The first sig tune is for Midlands Tonight. This was a late night regional opt out, broadcast live from Studio B. The programme covered news and current affairs.

The second sig is for the hosted drama series Juliet Bravo.

The final sig is for The History Man, and includes various versions. The History Man was a four part adaptation of the Malcolm Bradbury novel, transmitted in 1981. Michael Wearing was the producer. Juliet Bravo 1989, no reproduction without permission Costume designer, Janice Rider, took these polaroids of characters in the police drama series Juliet Bravo for continuity reasons. The polaroids are written on to include the character name, and the episode and ‘take’ number. Juliet Bravo was a hosted drama series at Pebble Mill for a couple of years, although it was a London production. The series ran between 1980-85, with Stephanie Turner playing the lead role in the first three series

Tony Shaw has matched the continuity photos up to the relevant episodes: