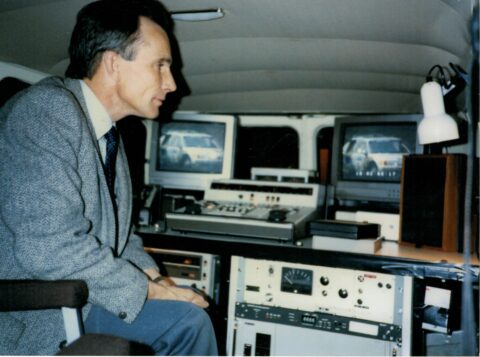 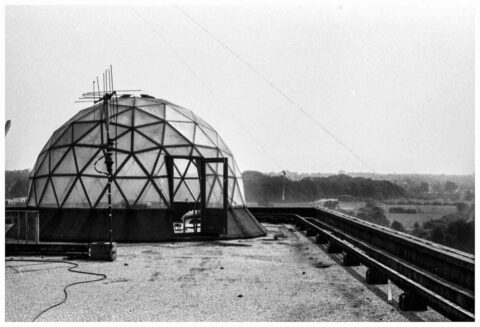 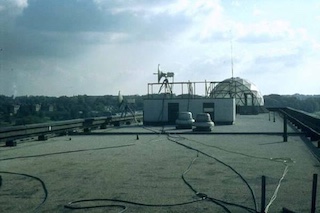 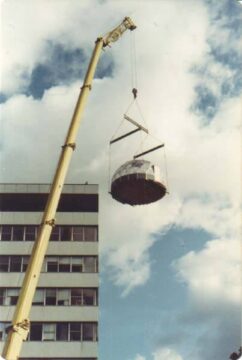 Jim Dumighan showing the Queen around Pebble Mill in 1981.

Malcolm Hickman: ‘I remember it as Roy Thompson and I were on shift in the comms centre when security phoned to say they had a bomb warning. We scoured the area and found a bag under a table in the corner. We didn’t know who’s it was, so security removed it. Turned out one of our colleagues, who was not on shift, had all his cameras gear in the bag as he had been photographing the queen.’

Roy Thompson: ‘Thanks Malcolm for reminding me of that had totally forgotten it. How intrepid we were searching for the bag!!! Do you remember the other time the comms centre was “under attack”. We thought we were being shot at when a loud bang was heard and a chip mark appeared on the large toughened glass window facing the road. Turned out to be the gardener’s lawn mower throwing a stone in our direction from the front lawn. Happy days!!’ Cherry picker. For lighting purposes I think, rather than a camera platform

Photos by Chris Glover from the 1987 drama series, Vanity Fair.

Jane Green: ‘Yes – lovely to see Paul Woolston in this pic. I was a runner on this. Up at 3am to bus in about a hundred extras to get into costume and make up – period dress – so took hours and hours, to shoot a ball scene at the Rothschilds’ fabulous Waddesdon Manor in Bucks. Seriously hard work! Lots of tired, hot, fed up actors to placate.’