As part of my training in 1979, I was attached to the technical team of a couple of productions including a drama, a BBC Schools’ production of The Long, the Short and the Tall recorded over 3 days at Pebble Mill. The producer/director was Ron Smedley. Key acting cast is listed at https://www2.bfi.org.uk/films-tv-people/4ce2b73aef97d. The episodes were subsequently transmitted as a single play. More details at IMDB https://www.imdb.com/title/tt13411812/?ref_=adv_li_tt. I can recall the lighting director was Barry Hill, the technical manger was Ron Irvine, the sound supervisor was Alastair Askham, and the vision mixer was Mark Kershaw.

The production was divided into 3 half-hour transmissions, each episode was allocated one studio day and recorded “live to tape” multiple times. Ron Smedley wanted the uninterrupted action from the stage play to be available in this TV production, enabling the actors to react better to the rapid dialogue segments. The production used a single set that occupied most of the floor area in Studio A, including a jungle setting at the rear of the hut. One shot in the programme needed a wide shot of that jungle and the entrance to the hut, but the camera shot would have included a lot of the lighting rig, so a glass shot was created to hide this unwanted area. 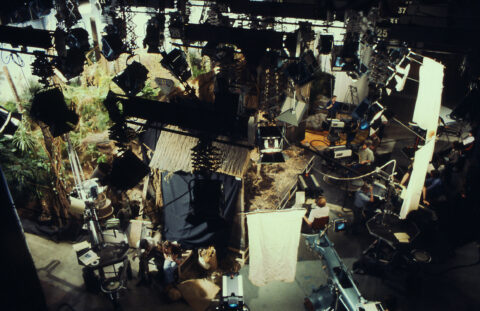 Hut interior (right) and jungle (left). Floor at edge of hut is quite crowded with technical kit. Photo by Andy Woodhouse, no reproduction without permission 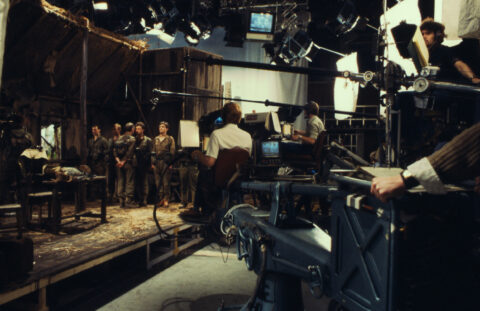 Multiple sound booms and camera cranes in use. Photo by Andy Woodhouse, no reproduction without permission. 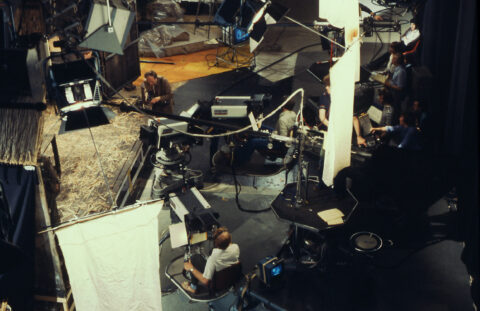 Close positioning of the cameras and sound booms on the floor. Photo by Andy Woodhouse, no reproduction without permission. 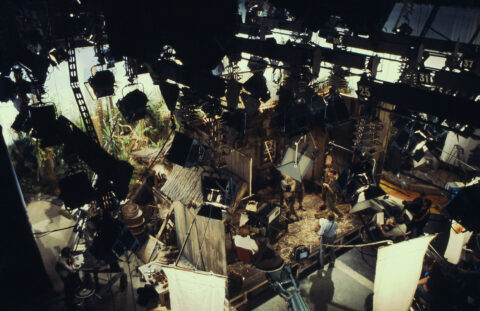 Shows size of jungle area, and use of bounced light for the hut interior. Photo by Andy Woodhouse, no reproduction without permission. 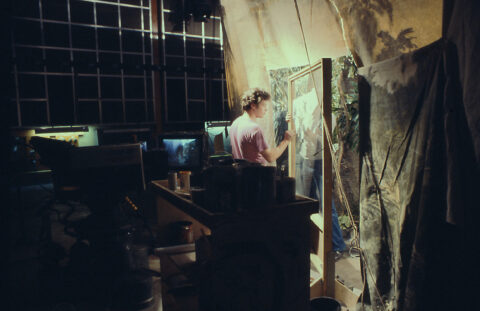 Shows the camera at the left side, with the artist, Steve Mitchell, painting onto the glass to add the scenery extensions. The artists monitor showing the composited image is just to the left of centre. Photo by Andy Woodhouse, no reproduction without permission. 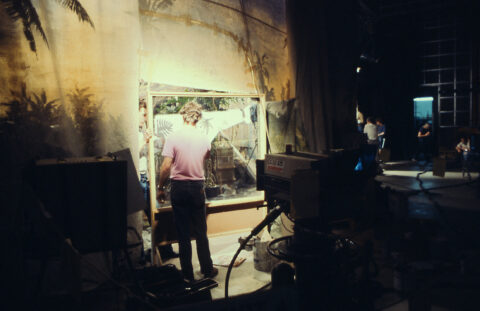 Cutout in the scene cloth, the glass in the frame, and the two artists at work. Photo by Andy Woodhouse, no reproduction without permission. 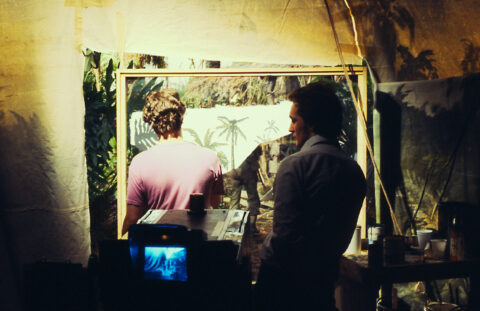 Detail of the painted glass. Photo by Andy Woodhouse, no reproduction without permission.

Lovely to see this production pop up. I worked on it, I was assistant to the lovely Make-up Designer Carol Churchill, and I looked after actor Micheal Kitchen who I remember as being really nice. This article is from the Pebble Mill at One book, 1986. Studio director, Mark Kershaw, describes the challenges of broadcasting from the foyer studio, as well as explaining how the show is created and what the following roles contribute: vision mixer, director, producer, researchers, designer, lighting supervisor, senior camerman, sound supervisor, production assistant, floor managers.

Mark Kershaw is seen directing in the top photo. It is possibly Roger Hynes up the ladder is the lower photo.

Andy Frizzell: ‘The line drawing looks like it’s from when they raised the ceiling (a godsend for lighting) and removed the inside canopy over the front doors (not so great, we used that to put all the ballasts for the HMI lights.’