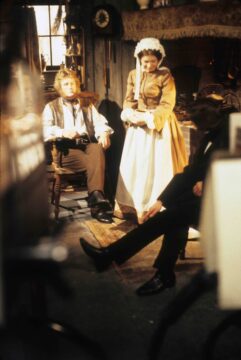 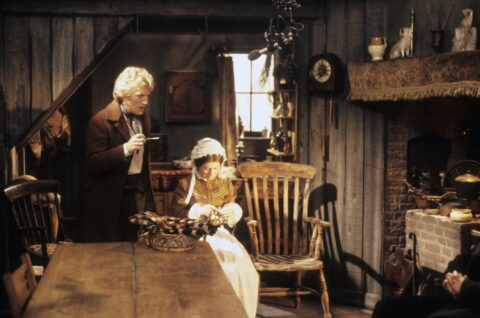 ‘Great Expectations’ 1981, made at Pebble Mill. It would have been recorded in Studio A, for the interiors and on 16mm film on location, for exteriors. Actor Philip Joseph playing Joe Gargery the blacksmith. The editor was Oliver White, assisted by Ian Bellion.

Here is the link to more information on the BBC Genome project: https://genome.ch.bbc.co.uk/search/0/20?q=Great+Expectations++Phillip+Joseph#top

Below is the listing for episode 1 from the Radio Times

A lonely little figure hurrying home across the marshes… The sudden terrifying appearance of a brutal escaped convict – and Pip is launched on an adventurous journey that changes him from blacksmith’s apprentice to snobbish young gentleman. Francesca Annis and Alex McCowen in Alexander Graham Bell. Copyright resides with the original holder, no reproduction without permission

Thanks to costume supervisor Joyce Hawkins for sharing the photo. The photo is from a six part series about Alexander Graham Bell, recorded at the Gosta Green  studio in 1965, and transmitted weekly on BBC 1 from 28th February 1965, at 17.35. Here is the entry from the Radio Times, c/o the BBC Genome project: