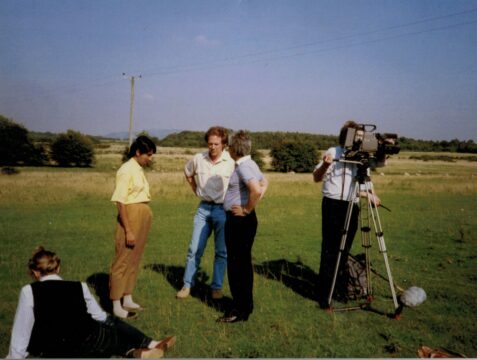 Photo by Mel Stevens, no reproduction without permission

Director Mick Murphy, in blue shirt, with Countryfile presenter, Roger Tabor. Possibly Keith Schofield on camera. PA on the ground is Carolyn Smith. The woman in yellow shirt is the researcher. This photo from 1989 is of Patrick Flavelle, on the left, (with the clipboard), directing on ‘Countryfile’.  The man with the rabbit is presenter Roger Tabor.

‘It was for a piece called ‘What’s British?’ about common animals and plants that you might imagine were native to Britain. Rabbits,not, Horse Chestnut, not etc Roger Tabor presenting and shot at Packington Estate who were really helpful. No facility fee as long as we didn’t say where we were. Very unlike the National Trust!
Nigel Davey on camera I think and my first solo shoot as Director. Clipboard, bouffant hair and pretending I know what I’m doing.’