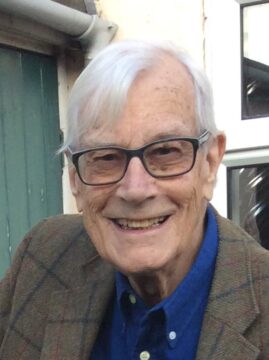 This blog is written by academic Lez Cooke about director Brian Parker, who worked on a number of significant Pebble Mill dramas. It was published on the Forgotten Drama website: https://forgottentelevisiondrama.wordpress.com/2021/01/03/brian-parker-1929-2020/
“Brian Parker, who died on 8 December 2020, had a long and eclectic career in television, initially as an actor, first appearing as a seventeen year-old in a live production of Dickens’ Bardell Against Pickwick (BBC 1946), where he played Master Bardell, and then as director of a wide variety of television drama, including popular series such as the BBC’s Softly Softly (from 1966-71) and The Troubleshooters (1966-68), YorkshireTelevision’s Hadleigh (1969-71), Granada Television’s Crown Court (1973-77) and Thames Television’s The Bill (1988-2001). Alongside these assignments he directed single plays for series such as The Wednesday Play and Play for Today, including Auto Stop (BBC 1965) with David Hemmings, Julia Jones’ A Designing Woman (BBC 1965), Peter Terson’s Shakespeare – or Bust (BBC 1973), Alan Plater’s Land of Green Ginger (BBC 1973) and James Duthie’s Donal and Sally (BBC 1978), for which Parker won the award for Best Direction at the 1979 Prague International Television Festival. Donal and Sally was about the relationship between two young people with learning difficulties, a subject Parker had previously explored in Steven (BBC 1974), a play he devised and directed for a short series produced by Tony Garnett.
In the 1960s-70s Parker had a particularly productive working relationship with David Rose, appearing as an actor in episodes of Scotland Yard (BBC 1960) and Z Cars (BBC 1964), both produced by Rose, then as director on 18 episodes of Softly Softly, for which Rose produced the first two series, and on four episodes of Alan Plater’s The First Lady (BBC 1968) which Rose also produced. In the 1970s Parker was reunited with Rose when the latter became Head of BBC English Regions Drama in Birmingham, directing four Plays for Today produced by Rose: Shakespeare – or Bust, Land of Green Ginger, David Halliwell’s Steps Back (1973) and Barry Collins’ The Lonely Man’s Lover (1974), plus four half-hour plays: Jack Rosenthal’s Thirty Minute Theatre play, And For My Next Trick (BBC 1972) and three Second City Firsts.
I first met Brian Parker at a Kaleidoscope event in 2014 where David Rose was introducing Medico (BBC 1959), a recently discovered drama-documentary which Rose directed. Parker described Rose as his ‘mentor’, underlining the important influence Rose had on his career. After the event he emailed me:
I really enjoyed the event last weekend and made amazing discoveries! My acting and directing mentor is still brilliantly defying Parkinson, one of my early shows is in the Library of Congress (after it was transmitted the writer took me to lunch, we ordered, and he said “what went wrong?”) and people are actually looking at stuff made long before home-recording was possible.
Sadly, the next occasion we met was at the memorial service for David Rose in 2017.
In July 2020 I contacted Brian Parker to see what he remembered about Steps Back, the David Halliwell Play for Today about which I was writing a piece as part of the 50th anniversary celebrations of Play for Today. Parker replied immediately, providing much useful information about the production of the play and it sparked an exchange of emails about his television work which continued until shortly before his death.”
Lez Cooke

Photograph by Ian Collins, no reproduction without permission.

The photo shows film editor Henry Fowler at his Steenbeck, editing.  Henry Fowler edited a variety of dramas and documentaries at BBC Pebble Mill including: