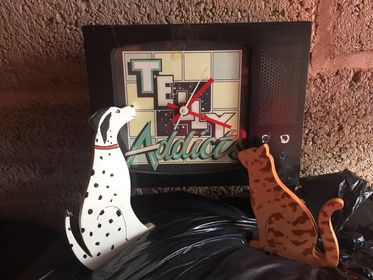 Telly Addicts clock, courtesy of production assistant Gail Everett. I’m not sure if this was Telly Addicts’ merchandise.

Telly Addicts was a BBC 1 television game show presented by Noel Edmonds between 1985-1998. Cameraman Robin Sunderland has amassed quite a collection of BBC programme branded clothing over his years at Pebble Mill, including: Telly Addicts, Bollywood or Bust, Pot Black, Saturday Night at the Mill, Good Morning Summer.

Does anyone who which show the BBC XIII is?