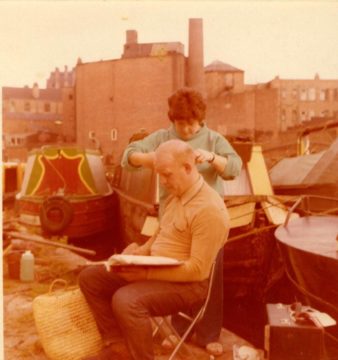 Les with Carol Drinkwater. Copyright resides with the original holder, no reproduction without permission

‘I walked into the Beeb and the receptionist said they didn’t have any jobs, so I said “If you don’t mind, I’ll sit here until you’ve got one…” I sat in Pebble Mill reception for three days! Eventually the personnel manager came down and said “You’re keen aren’t you?” I explained I didn’t want to “work” for a living, I wanted be part of the entertainment industry… Half an hour later, I had a job at the BBC! I joined the staff scene crew and the first major production I worked on was The Brothers. I did five of the seven series of All Creatures, it was brilliant to work on, they were really good times.’

All Memories Great & Small is available to preorder now from Miwk – http://bit.ly/2d7p5ts This article, by David Norris, about Pebble Mill appeared in the BBC retirees’ magazine, Prospero, recently.

Thanks to Peter Poole for sharing this article.

Keith Brook: ‘Ah, Brothers.My ‘roll your own’ cigarettes, in brown Rizla papers, featured heavily in the series when Hilary Tindall smoked them in a sophisticated way.I had to make them fatter to look like imported ciggies. Fair play to the girl, she wasn’t a smoker, but she inhaled my super strong, no filter tip, Old Holborn masterpieces.The whole series cost me a fortune!!’Mainly because of the retakes cause by Paddy O’Connell, which required another hastily make one.