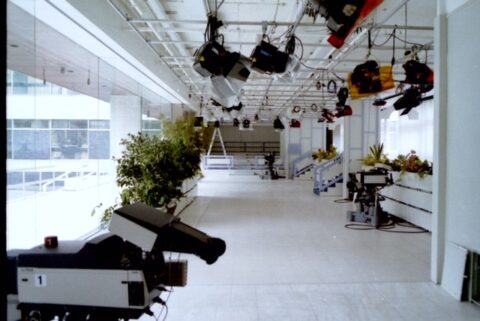 1980’s photo of the Pebble Mill at One studio, in the converted foyer of Pebble Mill. Note the Links cameras

Wendy Lewis Edwards: Four years on Pebble Mill at One then back years later for Good Morning with Anne and Nick. Remember Beryl Reid crawling on all fours across the floor between cameras to pull faces at Val Doonican singing away with his guitar. The viewing audience were completely unaware…

Julian Hitchcock: I hardly know where to begin. I first worked in the foyer in late 1978, worked on countless Saturday Night at the Mill programmes and hundreds of PM@1s.

Oddly, my last visit was as a guest on the Anne and Nick daytime show that took the same slot, in 1995, when I was escorted there and back in a limousine. On that occasion, I deliberately wore a checked jacket to pull the TM’s leg. (Sorry).

Eurwyn Jones: I remember working on Saturday Night at the Mill and Ginger Rogers arriving in a big car and walking in through the double doors.

The production team were Roy Ronnie, Roy Norton, Patricia Mifflin and Peter Wisdom.
David Crozier: I have many happy memories of being the designer on both Pebble Mill at One and Saturday Night at the Mill. I always loved the live TV atmosphere on both these shows. It was the Pebble Mill live TV experience which inspired my career change, a few years later, to becoming a TV director. I always enjoyed directing multi-camera live TV shows and the impression left by my time at Pebble Mill has never left me!
Carolyn Davies: Forgot how narrow it was! Amazingly well utilised space, remember it well for Daytime and Good Morning with Anne and Nick, bands, demos, cooking, how did we fit it all in!?!
Tim Dann: Great ‘daze!’…& who will forget Roy Norton in the Gallery; at the end of the show jumping up, knocking his chair over & screaming at ‘Presentation’…”Take me prez, take me, take me!!”….then as Susie says…Off to the ‘Strathallan’ for hospitality. Wonderful times.
Ruth Barretto: I used to work for john Grantham in Engineering (one of the loveliest boss) and I remember he had these huge rolled up artist impressions of the foyer area when it was in the planning stage. It was initially the reception area . He asked me if I wanted them . Being young I thought ‘why would I want them?’ Wish I had said yes now!!!
David Shute: I recall when the Wild Eyed Sidey was hot to go with this idea that the head of Engineering, a pleasant person, said it wouldn’t work ‘cos you can’t combine daylight & studio lighting. Phil gave him 30 mins back in his own office to come up with reasons WHY or come ready to discuss his early retirement. What a surprise, it all happened at speed ! Roy Ronnie died on 18th September 2015. He produced an enormous number of shows from Pebble Mill, including 77 editions of Saturday Night at the Mill between 1976-81. Annie Gumbley-Williams was Production Secretary for the last three series, and Production Assistant on other programmes with Roy, including the fishing series, Hooked. She remembers Roy being great fun to work with, and a very talented, witty and kind man.

This photo of Roy was taken when he was Midland Region News Assistant, taken in February 1961.

Thanks to Annie Gumbley-Williams for passing on this sad news, and the information about Roy.

Julie Hill:’ So sorry to read about Roy Ronnie and send condolences to his family. Saturday Night at The Mill was a fantastic show attracting great performers & a large audience. My great friend Penny Arcatinis and I were responsible for serving wine to the public before the show! They’d scavenge through the plastic cups in search of the largest ones I recall…
Happy days. RIP Roy. You were a top Producer.’

Susan Astle: ‘Sad news, I worked on many Saturday Night at the Mill. They were always great fun and, at times, unpredictable! I think alcohol may have played a small part. Susie Bankers.’

Tim Dann: ‘Very sad…I enjoyed my time as Designer on the first series of Saturday Night at the Mill…with the two Roy’s…& again with them both on the Kate Bush special….Those ‘daze’ will never be repeated!’

David Shute: ‘Another good one’s gone. I remember doing the warm-up for Sat Night. He was a great man for encouraging people to do more than they thought possible. Super chap.’